"My leg ulcer started as a small wound in my skin, it never healed despite different dressings I tried. The wound got bigger over time and now the pain is constant. I take pain killers all the time"

Venous leg ulcers are a consequence of venous hypertension that develops because of an inadequate calf muscle pump action and venous valve failure. Your leg requires both the calf muscle pump and one way valve system to function properly in order to remove blood from your leg back to your heart. Failure of these systems, leads to a type of high blood pressure within the veins of your leg, which in turn plays a central role in the development of venous leg ulcers.

Venous valves may fail without an underlying reason or secondary to previous pathology such as deep vein thrombosis (DVT). The first states that distension of the capillary beds occurs because of increased stasis. This leads to leakage of fibrinogen into the surrounding dermis. Over time, a fibrinous pericapillary cuff is formed, impeding the delivery of oxygen and other nutrients or growth factors to the affected tissue. The resulting hypoxic injury leads to fibrosis and then ulceration. The other hypothesis suggests that the endothelium is damaged by increased venous pressure and leukocyte activation. Proteolytic enzymes and free radicals are released, escape through the leaky vessel walls, and damage the surrounding tissue, leading to injury and ulceration. 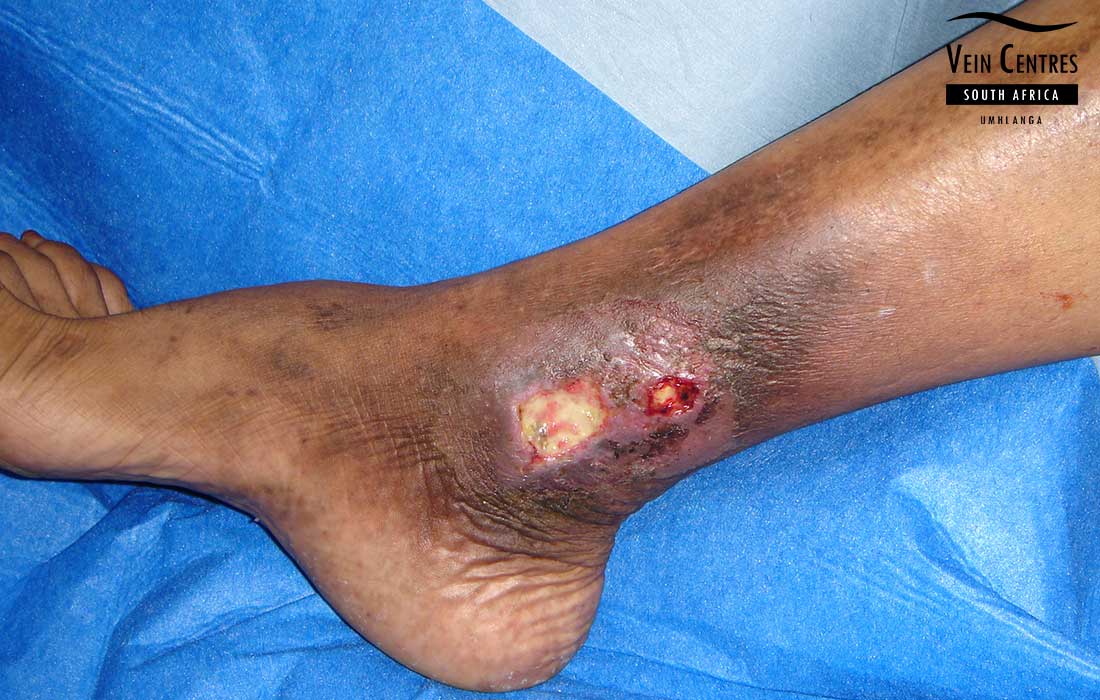 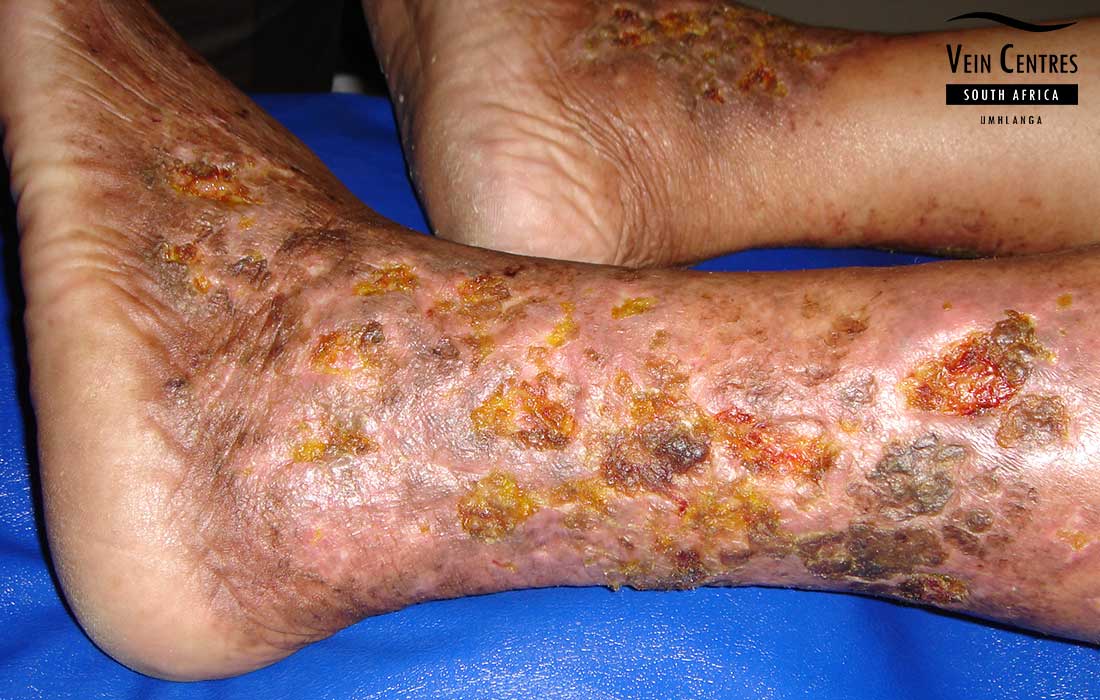 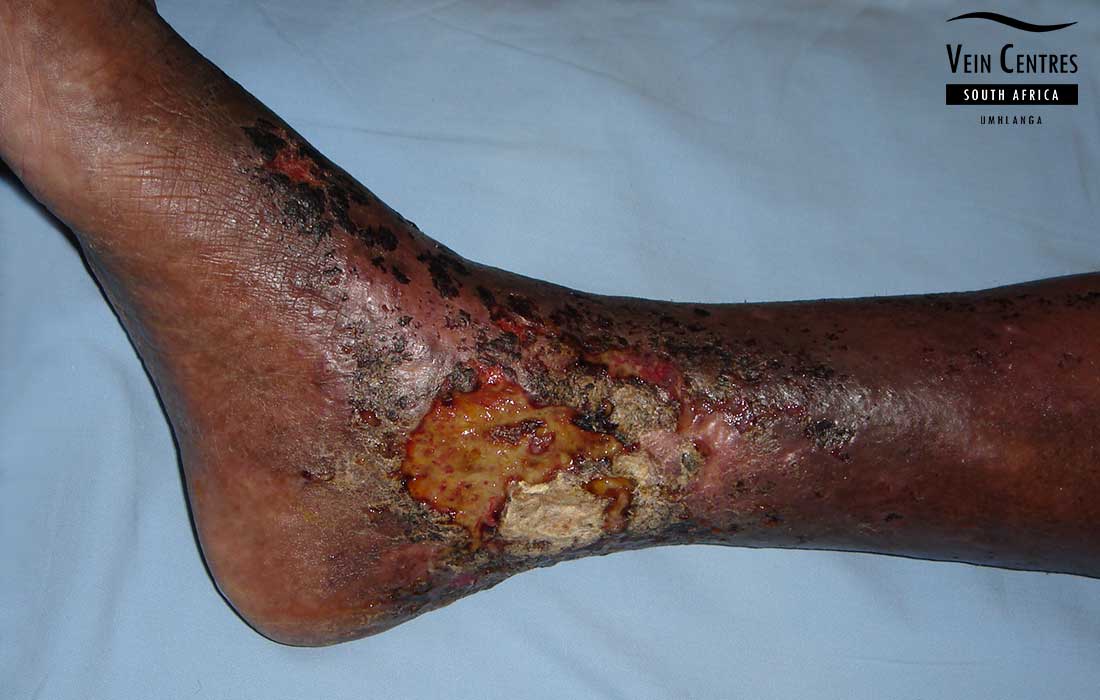 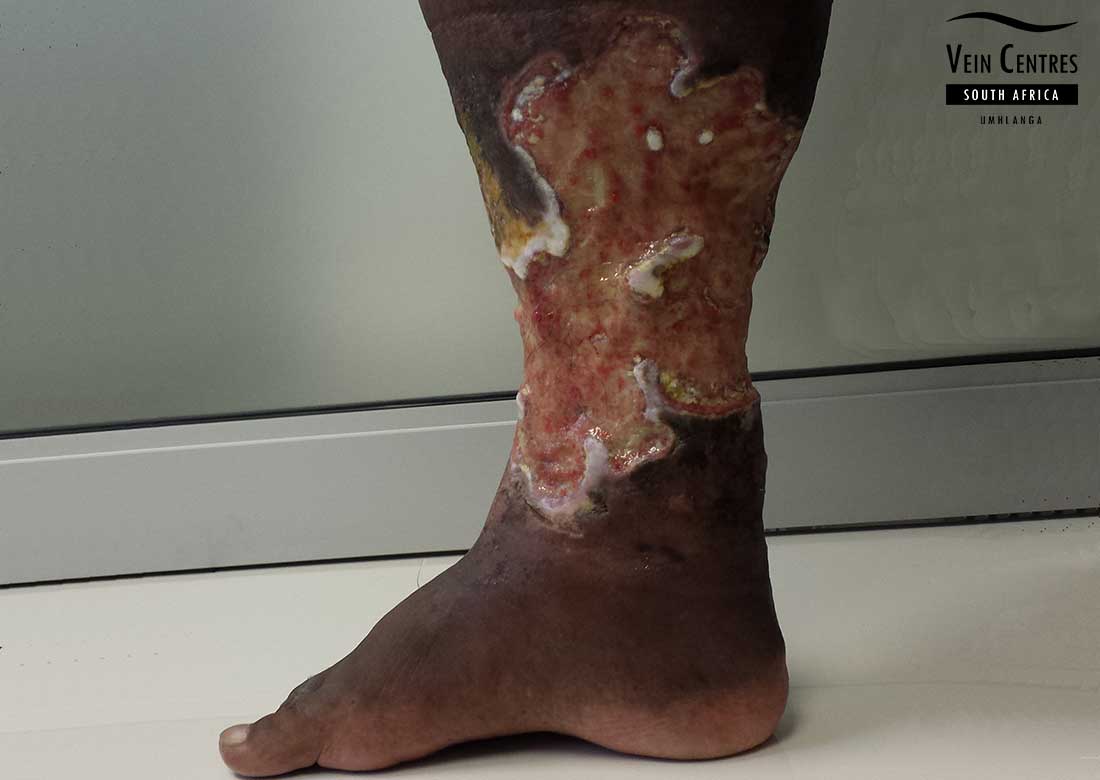 What are venous leg ulcers?

An ulcer is a break in the skin or an open wound. Venous ulcers vary in size and might be a small wound around your ankle or a very large wound involving most of the lower leg. A typical venous ulcer has an irregular border, pink/red tissue in the wound or ulcer bed. These ulcers often ooze a significant amount of fluid. They occur in the gaiter area of the leg, which is around the inside area at the ankle. The skin surrounding the ulcer is often affected by pigmentation and/or lipodermatosclerosis. Although venous leg ulcers are the most common type of lower leg ulcer, it should always be distinguished from other causes of leg ulcers including arterial, neurotrophic and diabetic ulcers. The treatment of these ulcers are very different. It is for this reason that it is important to consult a specialist about your leg ulcer. 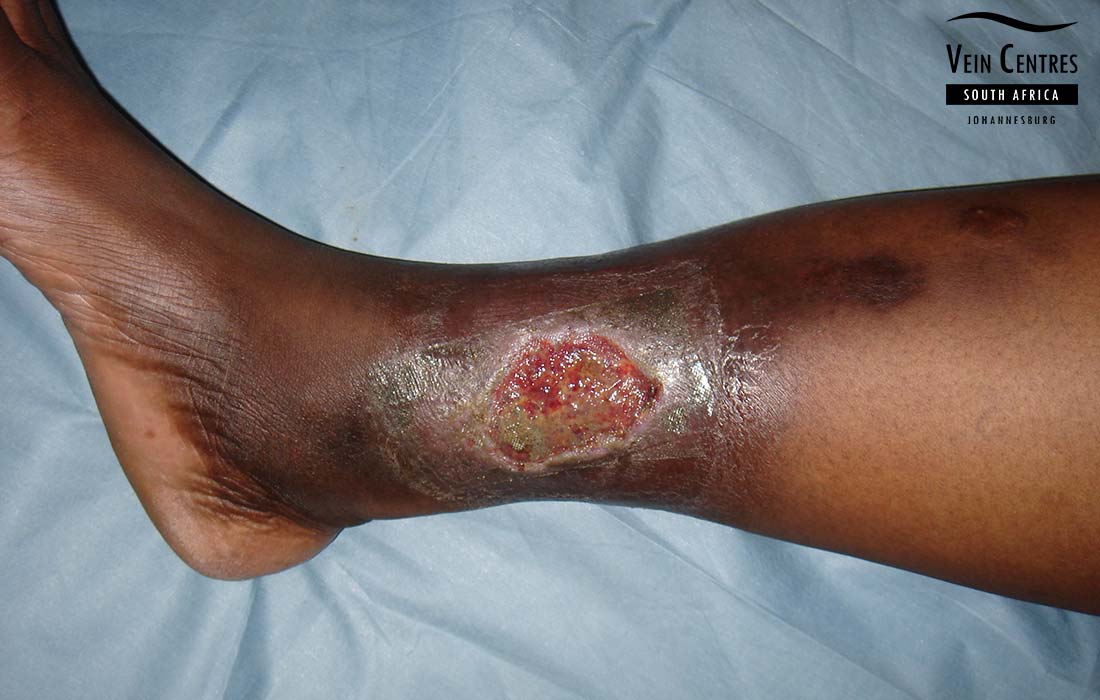 Venous Ulcer of the Leg

Venous reflux leading to venous ulceration of the leg. Notice the pink red tissue in the tissue base and irregular wound border. 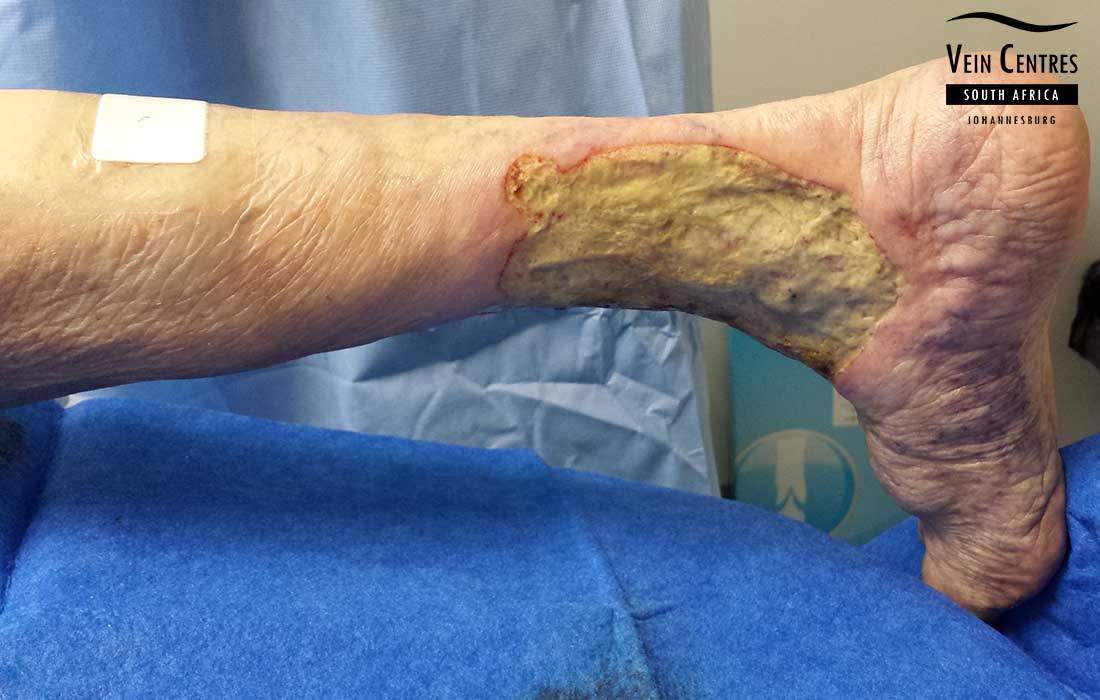 Arterial leg ulcer. Notice the devitalised tissue in the ulcer base (yellow tissue), and punched out wound border. 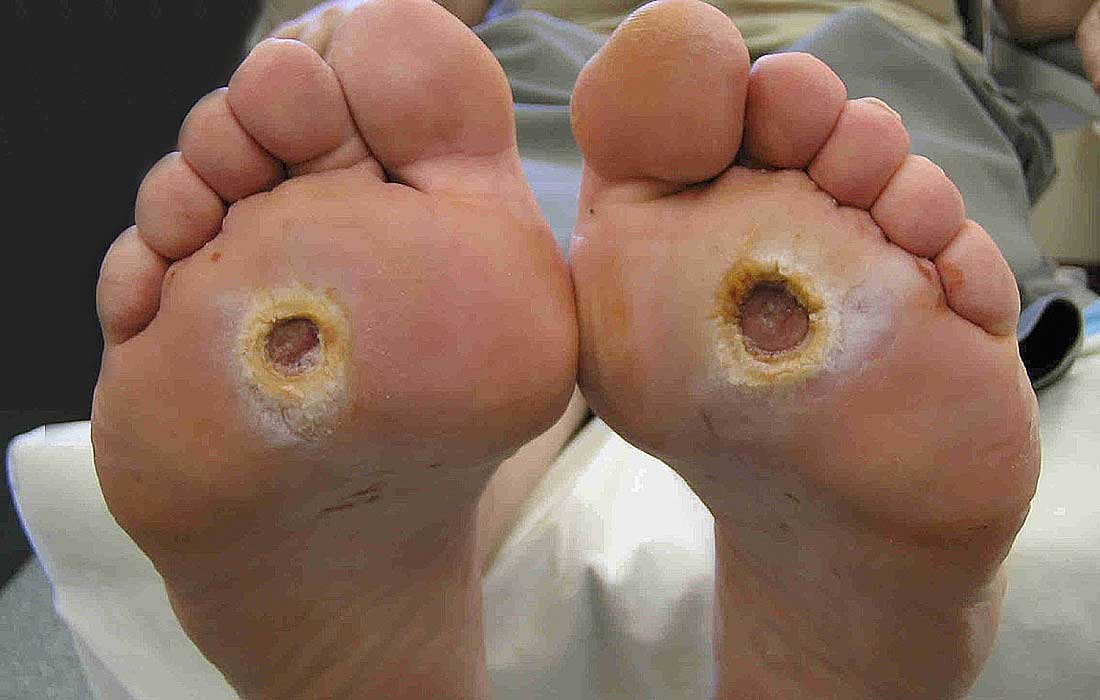 Diabetic neurotrophic ulcers of the feet. Notice the rim of hyperkeratotic tissue around the ulcer and the ulcer location over bony prominences

Venous leg ulcers often presents with open, non-healing wounds with fluid oozing and pain that is relieved on leg elevation. Some venous ulcers are asymptomatic, and only requires dressings. In patients with ARTERIAL ulcers, the pain is improved by hanging the leg from the side of the bed. Venous ulcers are progressive over time. In some patients they will enlarge quickly over time and in others slowly. Venous ulcers can become infected from time to time, which often leads to increased symptoms of pain, oozing and an odour to the wound.

Venous leg ulcers are the most common type of leg ulcer(80%), followed by arterial ulcers(15%) and then other causes. The treatment of these ulcers are very different and a detailed examination and duplex scan is required to assess your legs prior to any treatment.

It is still not fully understood why venous ulcers form. In the recent past it was thought to be due to venous reflux within the deep / main veins of the leg. With the advent of duplex doppler scanning, we have now found that this is not true, and that 60-70% of venous ulcers are actually caused by superficial veins or varicose veins. Previously it was thought that varicose veins were simply a cosmetic issue with no consequences. This has been proven false in a number of studies.

Venous leg ulcers are the end-point in a spectrum of venous disease and patients often end up with non-healing ulcers. The ulcers severely affect the patients' daily activities and quality of life. The ulcer can become infected from time to time and would require more specialized wound care. The ulcers often enlarge without treatment of the underlying cause, this happens despite the best efforts of a wound care practitioner. Pain often plays a central role and these patients often depend on a daily intake of pain medication.

Treatment of venous leg ulcers have been revolutionized over the past few years. It is no longer neccessary or indicated to condemn a patient to wearing compression stockings or bandages every day for life. Advanced endovenous techniques employed by Dr Blignaut yields excellent results in ulcer healing. Every venous ulcer patient is unique and as such requires a specialist approach in investigation and treatment of the ulcer.
Various international guidelines have now been published on the subject of ulcer treatment. A patient should NOT be treated with dressigns and bandages alone without having a duplex ultrasound examination by a specialist. Patients with varicose veins and skin changes should not be treated with steroids creams without undergoing a duplex scan.

Actual ulcer treatment consists of an in-depth consultation, wound examination and treatment, colour duplex doppler scanning of the superficial and deep venous systems of the legs, treatment plan that includes the procedure(s) to be carried out, medication and wound management plan. The average scenario would be a patient with an ulcer, with superficial vein reflux, treated by endovenous radio frequency ablation and specialized wound dressings until healed.

Venous ulcers can only be prevented by having venous reflux treated. The current treatment of choice in patients with superficial vein reflux is endovenous ablation by radio frequency catheter. Patients who have developed a venous ulcer because they previously had a deep vein thrombosis and now has deep vein reflux, might not be suitable for an endovenous ablation. These patients suffer from post thrombotic syndrome, and they mainstay treatment is daily wearing of compression stockings.

Venous duplex ultrasound scanning is the current gold standard in the diagnosis of vein disease. It involves the use of an ultrasound machine and high frequency probe to accurately asses the anatomy of your veins as well as the flow patterns wihin them. Ultrasound scanners do not produce any radiation (unlike x-rays) and they don’t involve needles or injections. We do not use the older techniques like the Trendelenburg or tourniquet test to diagnose vein disease. Hand-held dopplers are not used in our vein centres as they are inaccurate.

Venous Ulcer Before and After Pictures

For a specialist consultation